Favorite Cars of my Indy days... 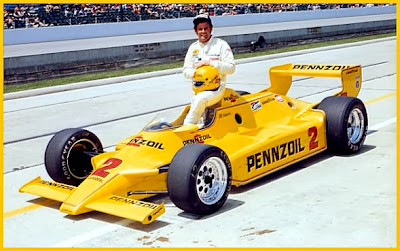 The very car from which this blog derives its name and first I saw live in an Indy 500.  While reading about this car in Sports Illustrated (I think it was), I realized this car was the 'next wave' of Indy cars which was the beginning of the ground effect era.

Sleek and fast and in the brightest yellow than I'd ever seen, this chassis still holds my title for 'best looking Indycar nosecone'.  My dad was an Al Unser fan (which pretty much made me al Al Unser fan), and for Al to not win in 1979 with this superior machine was disappointing to the extreme.  That winter I made my Pinewood Derby car in it's color and numbering treatment.  To see it one year later with the angular red 4 on that nose and some guy named Rutherford driving into victory lane was, to me, a jab that the fates could've done without.  That Chaparral that sits in the IMS Hall of Fame museum will always be the No. 2 Pennzoil car in my mind.
Posted by DZ at 10/21/2009 09:50:00 AM No comments:

Synopsis, Part Deux - The End of the Beginning

My second (and fate-sealing) interaction with the Speedway was to see the race in person in 1979.  I anticipated that day much like most any Christian kid did with the coming of Christmas morning.  The wait for that day was nearly interminable, but the day arrives and our journey begins.

Sparing the day's travel details, We found our seats in the first row of L-South stand bleachers.  L-South (gone years ago to the expansion of the mighty aluminum L-Stand) was deemed a great raceday value by my father and I'd have to say that he was right but not exactly for the reasons he surmised.  His reasoning was that we were seeing the cars at top speed but paying less than half of the price for the seats corresponding to our location which was the outside of Turn 1.

My reasons became immediately apparent on the first green flag lap.  We were a scant 18 feet away from the outside wall of the track at the point where the cars have reached top speed on the backstretch and are beginning the entrance to Turn 3.  He was right about the speed.  I'm fairly sure that he had no idea the extent of sensory-loading that would occur by being that close to the track.  My friend and I were 11 years old and, by all parental reports, were the quietest they'd ever seen us during those opening laps of the 1979 race.

Anticipation had finally given way when Tom Carnegie came over the PA system announcing the green flag had fallen.  Cheers went up in L-South and all around, followed by a quickly hushed anticipation of the coming cars.  I very distinctly recall the following moments and think about them most fondly on raceday each year.

I'm not sure I will ever understand fully the extent of the impact those moments had on me, but the result was clear - I had become and Indy 500 fanatic.  The crowd sound swelled from the large L-stand whose view directly down the backstretch signaled the coming onslaught of machines.  I recall the bleachers vibrating slightly followed immediately by the crescendo of screaming Cosworth, AMC, Offenhauser, and Drake-Goossen-Spark, motors and an overwhelming wave of sensory loading culimnating in the decrescendo of motor noise and the sweet, pungent smell of burnt ethanol.  In approximately 9 seconds, I had felt, heard, seen, and smelled the most powerful things ever before in my life.  I could hardly wait the remaining 36 seconds for the leaders to come back around and experience it again.

That brief moment and the following events were so powerful, I would long for that day to arrive every year.  In the years I couldn't attend, I listened even more intently than ever before recalling that beautiful, sunny, Indiana day when the 33 (plus 2 due to the USAC-CART legal wranglings that year) cars shook my senses to the extreme.  To this day, I still cannot imagine a sporting event having more impact on me than May 27, 1979.
Posted by DZ at 10/19/2009 12:09:00 PM No comments: