As is typical in the spring, my business responsibilities took me to Indianapolis this past week and I again made time to hit the IMS Museum and Gift Shop. Also took the bus tour for the first time.


The museum was in the process of setting up the new 100th Anniversary Race display of only winning Indycars which includes 67 chassis from (and including) the first race in 1911. Amazing memories came back from races I've attended or merely watched on TV.  I also got the chance to see up close several cars I hadn't prior. Some truly legendary machines there and it got me thinking about my favorites.  Today's favorite is not necessarily known for it's dominating performance or unique engineering as much as how it became legendary... 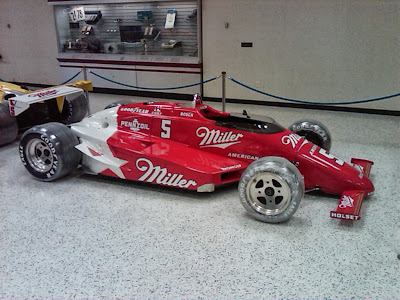 The display wasn't complete when I visited so to see the complete display, I'll be visiting again in May when I return for race weekend or during a practice day.


If you are in the Indianapolis area sometime in the next 3 months, I highly suggest a trip through the museum, the bus tour, and catch the 25-minute movie in the museum as well.  Total admissions will set you back $10 for an immense amount of American automotive racing history that won't be all together like this possibly ever again.
Posted by DZ at 3/21/2011 03:14:00 PM 2 comments:

Who do you trust?

Despite my very slight case of megalomania, I don't envy Randy Bernard one bit.
All the "input" he's been getting lately from such divergent sources as TV networks, team owners, sponsors, and the 'almighty' fans, all with legitimate views, he must feel a bit in need of some sorcery to fairly placate these people. The recent hoopla over the proposed changes to the restarts/pitting/lucky doggery, as suggested by the owners, raises the question of who does Bernard need to listen to the most?
Owners have 'skin in the game' and must always have their input, but that is to say not always will they, or should they, get what they want.  Sponsors want to have as much exposure for as little money as they can which is totally understandable, but their influence on the racing product should be minimal.
TV networks appear to be the most flaky part of this equation with their heads half-buried in the traditional decades-old model of 'we show it, when we want to show it, and you watch it and be thankful'. TV, while still the most traditional method, is far from the only avenue of content viewing and until they realize how much they're missing out on by not including online access, extra features, and expanded content that a majority of the faithful viewers WOULD PAY EXTRA FOR, they will continue to underserve the very audience for which they are aiming. Traditional TV media appears quite able at head-in-the-sand thinking which stems from an acute misunderstanding of how the audience is getting their content these days ('I want it, when I want it, on multiple devices I may use to attain it').
Lastly, the fans. Perhaps Mr. Bernard has set a precedent from which he may never recover.  He allowed direct contact from the fans. Wow. Big mistake. You want 17 different opinions about your product? Ask 17 different fans. Herding felines is a simpler task than understanding what the fanbase wants. I'm as guilty of taking advantage of this access as anyone and I think it's time for the fans to take a step back, count to 10 or something, and get a grip.
Yes, we are the reason for sponsorship dollars and ticket sales.  Yes, we buy merchandise and watch the (at times, meager) coverage. Yes, we are the end customer, but what we are NOT is racing experts. Why do we as fans feel the need to have our input so greatly valued, just because we have the ability?  I've never raced a day in my life so how valuable is my input on the mechanics of making a good racing product really? A significant portion of long-term fanbase (pre-split) is very knowledgeable in the 'how it used to be and what worked 17 year ago', but how valuable is that really in today's game?  Not much, I say.
What we DO have of value is a great enthusiasm and passion for our beloved sport, and for that reason alone, the league, owners, and TV coverage should be open to input from the end customer. We're ultimately the reason everyone there has a job. We're the people who spend money on this diversion and not one of myriad others. We deserve to be heard, but like the owners, and because of our herd-like mentality, shouldn't always get our way with respect to racing product, because we may not actually know what the hell we're talking about all the time.
What's a solution? I think Mr. Bernard needs to seriously consider a competition committee which includes representatives of the league, owners, tracks, promoters, fans, media, and sponsors who all get in one room at the same time and hash out the final racing product.  Using the current 'throw it at the wall and see what sticks' (or put it online and see what flames erupt) is a fairly poor way of developing a product that satisfies such divergent input.
Unfortunately for 2011, it's too late to accomplish this feat, but for 2012, I see it as essential to maintain a product that satisfies as many as possible and can therefore grow and prosper into the future.
Posted by DZ at 3/14/2011 10:01:00 AM No comments:

Missed It By THAT Much...

Indycar missed it's opportunity last July.  NASCAR continually and willfully misses the mark. ALMS has only begun to toy with it, but is far from achieving it.  NHRA is the polar opposite of it.  All 'too establishment' I'm afraid.
The 'it' to which I refer is the basic formula for what I believe would be the next great automotive racing series to happen on this planet. This will be a sport that won't be dictated primarily by TV ratings or revenues.  It won't need special or elaborate marketing plans and efforts.
Ever notice that certain things that are in very high demand need very little promotion and are able to not be subject to the demands of TV production?  Rather, they invert that formula and tell TV and media how it may be covered, if they choose to cover it, so as to provide the best possible viewing experience to the audience.  One of the few examples left in this sports landscape I can point to would be something akin to The Masters golf tournament.  "Here's the duration of ad and frequency we allow to our viewers, take it or leave it".  Brilliant.  Coverage with the viewer foremost in mind, not the advertiser?  I like it very much already.
A racing series which focuses on open and futuristic propulsion technology as the primary basis for competition would certainly be highly interesting to a vast motoring public as well as manufacturers who would love to ultimately sell their latest engineering triumph to commercial and individual buyers the world over.  Race on Sunday, sell on Monday is still a valid modus operandi for those who would provide their vehicles to the public for sale.
I seriously believe a racing series that would focus on moving a four-wheeled vehicle of very specific size and weight as quickly as possible with a limited fuel/'net-carbon' usage formula would be of great interest to many people and industries. Even better if you do this over more varied terrain and course styles (ovals, streets, roads, distance/rally, sun, rain, snow, locusts, etc.)
I'm far from a energy scientist but it seems an equivalence formula for differing propulsion resources (hydrogen, electric, hydrocarbon, solar, wind, biofuels, whatever) could be established and then establish a challenging maximum amount allowable to reach the finish.  To be clear, I'm assuming we're talking about moving a mass that is well-beyond the limits of human-power here.  Also in the formula I would support major time credits or monetary bonuses for meeting limits on amount of the post-propulsion carbon output (exhaust).  All of course would need to be measurable and even-handed.
I realize this all sounds MUCH easier than it likely would be, and quite possibly more expensive, but when has anything great ever been easy?  I contend that the expense already incurred by manufacturers involved in multiple series would actually be reduced by limiting it's involvement to this series.  The basics of the series formula could be used all over the globe and tailored to meet regional resource limits of that global region.
Racing returning as a true laboratory for our future vehicles in this manner sounds like something I would have a tremendous amount of interest in watching (compared to what is produced as racing today) and something that seemingly would market itself to manufacturer participation and product-consuming public alike.  What do YOU think?
Posted by DZ at 3/02/2011 12:23:00 PM No comments: