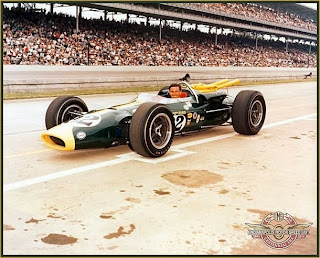 What a gorgeous car and what a terrific driver Jim Clark was. What a revolution took place at Indy when the Lotus (and Cooper Climax before it) came to the Speedway.

Change and innovation were not exactly hallmarks of Indy at the time and but none so rapidly ushered change as when the little Lotus was driven to victory lane in 1965.  The car had already become an sensation for its innovative design, but had yet to prove itself by winning.  The likeable Scotsman, Jimmy Clark, had crossed the Atlantic with his Formula 1 constructor and Lotus founder Graham Chapman in 1963, winning in only his third try.

With the dominance of the rear-engined, small, lightweight chassis, the days of the classic and venerable Watson roadster chassis were all but done.  Some lamented the change brought about by the foreigners from 'across the pond', but the change became the new standard, bringing about a revolution in thought, design, and competition to the Indy 500.

1. Sarah Fisher has officially won me over as favorite Indycar team owner.  Oddly, had she not gone through all the sponsor crap and race misfortune from May 2008, I doubt she would have reached the level she is today.

2. Relatedly, I have a recurring thought/dream that keeps nagging - Tony Kanaan, sick of the Andretti Team drama leaves Andretti Racing and joins Sarah Fisher's team.  99.875% sure this will never happen, but I get the feeling he was so sincerely sympathetic to how much he (and his spin in front of Sarah's car causing their May '08 Indy 500 collision) affected her entire program and life.  He decides that her story and modus operandi for the fledgling Sarah Fisher Racing program is suitable to his genuine and honest hardworking personality.  TK and SF, BFFs.  OK, maybe too Hollywood.

3. 2012 racing machine specs - Allow alternate propulsion systems for Indycars mated to a single, approved chassis.  Lead the way into the new automotive technologies instead of lagging it... ahem NASCAR.

4. Pay Shaquille O'Neal to become official SuperFan of the IZOD Indycar Series.  Allow him to render any or all of his awesomeness to promoting the series.

5. Allow Danica to go to NASCAR without any fanfare either positive or negative.  This league existed before her and will exist after (see Sam Hornish, Jr.).

6. Give 5 random fans at every race a free 3-lap ride around the track in the two-seater car driven by an Indy legend.  Make sure this is done on raceday, prior to the race start.