Once again, it's that time of year that many of us struggle with. Mere hours after the checkers fall for the newest driver to add their name and likeness to the century-old legend, Indy 500 Seasonal Affective Disorder engulfs those for whom "364 days to the Indy 500" is quite possibly the saddest sporting phrase uttered at any point during the year. Instead of wallowing, I'll somewhat wistfully recap my view of the 101st Indy 500.


Aside from my raceday attire, for which my son grows increasingly unimpressed, and those of my two Indy 500 compatriots (who you may have seen in the IndyStar, et. al.), I've learned to simply take in the events we choose to attend as they're presented.

Admittedly, the ominous daily weather forecast required that we have at least some idea of contingencies and ingress/egress plans. It was one of the worst Indy 500 weekends for weather forecasts I've seen in a very long time. Fortune allowed us some really terrific weather for being at the track and we were able to catch all the events and nearly all of the people we wanted.

This year was my 30th race.

I didn't have any specific plans to celebrate the milestone, other than my tried and true mantra of simply "being present" without trying to manufacture genuinely good times.

In reflecting on 30 races I've attended, 1979-'80, '88-'17 (except for 1997 and 1998 when I protest-voted with my wallet to not attend because of my view that the sport was fractured and severely diminished), I find myself currently relatively healed from much of the heartbreak and tragedy during the last 20 years. I grow more weary of that process each time I've done it but, after the thrilling race that was the 2017 edition, here I go again, starting to fall in love with modern Indycar racing and the 500 in a new way.

Firstly, I am extremely thankful and aware that the Howard-Dixon crash in the South Chute was perilously close to a result that would have many again calling into question a great many things about the sport. I've made those thoughts and concerns evident on more that one occasion both here and via Twitter over the last six years, so I won't take up that banner again, except to only state that we should all be well-aware that we were lucky in the extreme to have the result we did.

During our slow progress through traffic back to our hotel, I kept thinking about this Indy 500, and the word that kept popping up in my head was "prototypical".

In more current terms of the racing anyway, the myriad of storylines and strategies coming into raceday, the speed, pageantry, excitement, and spectacle of it all seemed more natural and just as amazing as most any previous, culminating in 10 of the most riveting closing laps of drama I've seen in 30 races. Takuma Sato's redemption from the slightest of miscalculations 5 years earlier was a classic heroic story which will only grow with time. 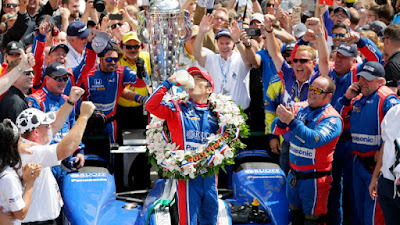 It is perhaps a blessing and a curse that each race of this legendary event gets compared and contrasted to the many before it every year, but I revel in the fact that the old Brickyard seems to always produce something amazing and unpredictable along the way.

The 101st running was no different in that manner.

"Here I Go Again" is an oft-used phrase in music over several generations and genres to describe that degree of yearning and even helplessness one feels when experiencing a similar love or situation again that, for whatever reason, once ceased to be. So whether it be Ricky Nelson, or Whitesnake, or Salt N Pepa, or The Hollies, or Country Joe and the Fish, or Dolly Parton, or Bobby Wright, the theme of loss and re-connection with someone or thing once precious feels most apt for my most recent experience with The Greatest Spectacle in Racing.

I guess I have no choice now but to do my best to wait patiently for the coming 51 weeks to pass until the next Indianapolis 500.