A Personal Appeal from Indycar Uberfans

OK, so most everyone has seen the mighty Rubens Barrichello in the appetite-whetting video of his test in Sebring with the ever-present GoPro cameras, mobile devices, Facebookery, and Tweetering which documents all sorts of action and going-on these days.

A fair bit of radio and print news has also emerged from the trickles and gushes of information from this 'private' event. We've even seen heretofore unofficial and highly (but not really, apparently) classified performance information from various sources on site in Sebring.

We fans go ga-ga for this stuff, especially on the heels of the demi-official start of the 2012 racing season, The Rolex 24 Hours at Daytona. Our juices have been flowing already this off-season with thoughts of the potential for new juggernauts (or at least some getting-to-know-you drama from learning new equipment).

My point is (and I do have one) that we "uberfans" LOVE (bold,underline,italics) this information!

My fear is (and I do have one) that despite all the assumptions of privacy during private testing, we're on the verge of seeing a ban on Twitter use (or other such similar outlets) by league and league-related peeps. 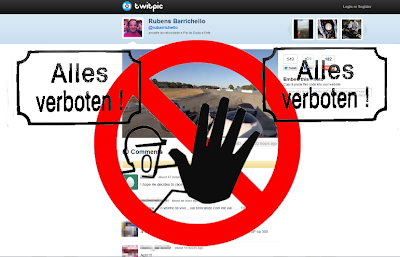 Sincerely,
FansWhoRespectAndEnjoyTheseRaysOfIndycarSunshineDuringTheOffseason
Posted by DZ at 2/01/2012 11:43:00 AM